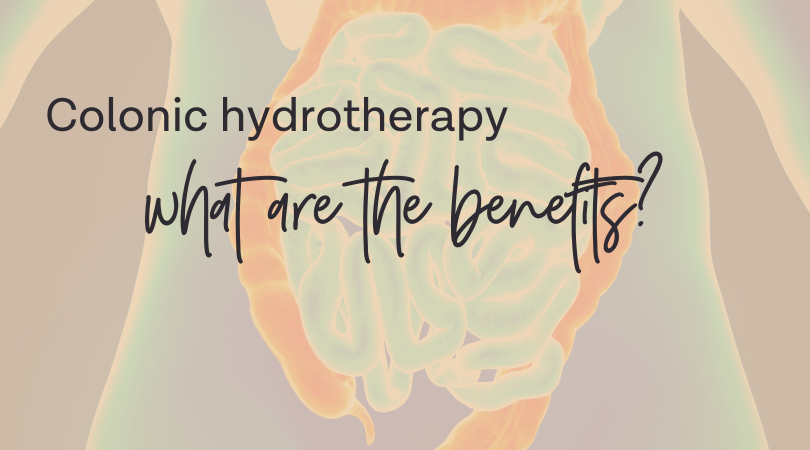 What are the benefits of Colonic Hydrotherapy?

In the interest of being an authentic integrated doctor that believes in western and alternative medicine complementing each other, I figured I needed to put my money where my mouth is (or rather my bottom!) is, and have colonic hydrotherapy.

Recently, I have felt increasingly fatigued (yet not sleeping well) more stressed, and I’ve been craving sugary, beige foods. My weight has gone up. I feel this is due to stress as opposed to any other undiagnosed cause.

This therapy is also known as colonic irrigation or (both amusingly and worryingly) a ‘botty blaster’. At this point I would like to state that I have never heard the term ‘botty blaster’ being used at any point during my colorectal surgical rotation as a junior doctor!

Where’s the evidence for colonic hydrotherapy?

The gut being our ‘second brain’ is something I hear frequently, and gut health seems to be the hot topic. So it seemed pure common sense to give my gut a good spring clean.

Apparently, though, there isn’t enough good evidence to support the effects of colonic hydrotherapy. I didn’t bother to read any studies, as I expected that the conclusion would be the same as always: “Better and bigger research needs to be done.” All I know is, everyone who I know has had a colonic has felt great afterwards, and has continued to have them.

Apparently Princess Diana, along with many celebs, was a fan of the colonic. The anecdotal evidence of a miraculous sense of wellbeing, mental clarity, bright skin, instant weight loss and enhanced energy make it appealing.

(Then the mental picture of an elephant trunk spraying water up your bum makes you feel you’ve actually grown attached to the brain fog, dull skin, cravings and bloating!).

I have long been open to trying all sorts of methods to combat stress, on top of my usual REVIVE methods of rest, exercise, visualise, intake, vitality and environment.

Now it was time to pull out the big guns: the hosepipe.

It’s a serious case of FOMO when you haven’t washed your car in a good couple of months, but do book in for a washout of a self cleansing organ.

My concerns before booking in for colonic hydrotherapy

Before having the therapy, I had a few concerns…

All worthwhile worries, I felt.

However, the promises of youthful skin, sparkly eyes, plentiful energy, weight loss, reduced cravings, restful sleep and reduced stress was too appealing. I booked myself in and didn’t look back (or down).

Dr Talwar was immediately welcoming and exuded a calm, caring energy. He is 75 years young but looked at least 10 years younger (crediting regular colonics for his youthfulness). He was also very positive and happy. Whatever he was on I wanted, so he is a good advert for his own clinic!

A retired GP, now solely practicing alternative medicine, he told me how busy he is providing colonic hydrotherapy. He continues to offer the service due to how impactful the therapy is on his clients. He wholeheartedly believes in its therapeutic value and the varied benefits it offers. For £60 (he has not increased his prices since the day he started) it’s an absolute steal if it does result in all the listed benefits.

Whatever he was on I wanted, so he is a good advert for his own clinic!

Fortunately, I don’t suffer with any digestive symptoms so I wasn’t expecting any revelations there, although Dr Talwar promised I wouldn’t be craving those sugary carbs anymore, so that would be a plus.

My main motivation was seeing if colonics reduce stress and improve energy. I didn’t want to miss out on the secret of healthful youthfulness either, so I gladly hopped on the bed after completing the usual standard consultation questions, removing everything from my waist down and donning a disposable gown. Dr Talwar explained everything and what was to come, and appeared so excited about how good I was about to feel that I was quite looking forward to it at that point!

I lay on my left side while Dr Talwar inserted the clear plastic hosepipe. This is where my breathing exercises came in very handy! I also felt this was karma for all the times I’ve performed rectal exams on my patients (although my fingers are considerably smaller than that pipe!). To be fair, it wasn’t painful. Then the water was turned on. I tried to keep relaxed and focused on Dr Talwar’s small talk.

He uses a closed system with disposable equipment. This means there is no mess, no smell, and no noise. Everything goes through the tube. I didn’t realise there was any other option, but apparently an open system is common, with water being pumped in and everything basically exploding out of the anus. (Apparently this gives a good sense of relief. It certainly doesn’t sound like my kind of thing, but who am I to judge – especially with a hosepipe firmly inserted in my rectum!)

He used a closed system with disposable equipment. This means there is no mess, no smell, and no noise.

Dr Talwar enthusiastically proclaimed that his clinic is the first and only clinic to use a mirror, so that patients can actually see what’s pouring out of the tube. He encouraged me to keep watch, so I could see all the stress physically disappearing out of me. You’d think you wouldn’t want to watch, but it turns out it’s one of those things you can’t peel your eyes away from. Or perhaps I just felt desperate for a sign it would be over soon, like an aeroplane flying a flag that reads ‘The end, it’s empty, all over’ flying out of my colon.

As the water filled me up it gave a sensation of cramping discomfort. Not pain by any means, but certainly uncomfortable, with a sense of wanting to be on the toilet (alone!). Dr Talwar stayed throughout the therapy, pumping the water to mimic the peristalsis of the gut and intermittently massaging my abdomen. After about 45 minutes it was over. You might think it would be awkward to have someone water your insides for 45 minutes, but actually Dr Talwar has such a caring and healing manner that I think it is likely to be a more effective procedure because it is performed by him.

Finally we exchanged pleasantries and I was given a course of probiotics to replenish my gut – and booked in for a repeat therapy in 4 weeks. After that I was advised to have it every 3 months.

That night I slept really well. The next morning I weighed 4lb less, and my cravings were definitely reduced, so that was a good result for me. I also felt that my skin looked brighter and my energy more positive.

Interestingly, post-colonic I found could run for 40 minutes without stopping (this is quite an achievement for me). Usually it takes me a good few weeks to build up my endurance for running anything over 20 minutes. This was a notable change to my usual running ability. Was it the colonic? I haven’t done any running lately, and barely any exercise at all, so it wasn’t down to recent training. (Before anyone thinks I needed to run more due to reduce bowel control, that was not the case. I ran more because I just felt I could!! More of that please!)

Post-colonic I found could run for 40 minutes without stopping. This was a notable change to my usual running ability.

Did I enjoy it? Not particularly. I didn’t feel that instant sense of relief that lots of people report but I guess that must be for people who do suffer with constipation.

Do I feel better? Yes. Every day I focus on the lifestyle measures I need to support my health and wellbeing, but the colonic hydrotherapy was a new intervention and I did feel healthier, with more energy and the urge to eat healthier foods. I do feel I look less tired and my skin looks brighter.

Will I go again? Yes. I figure I need to keep trialling this intervention to see if it gives me continued benefits.

What was I most surprised about? How many people I know who are closet colonic goers!

Here is the link to Dr Talwar’s clinic:

Yours in health and happiness